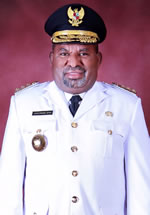 Papua deputy Governor Klemen Tinal is ready to fight for the fate of the provincial and district honorary people who reach the 1200s.

Nevertheless, he requested that every complaint be expressed respectably and dignified. So it can be fought as it should by district leadership.

“For this reason, I ask that a written list be immediately made to me. We must help Papuan youth and we show the Papuan people to be more respectable”, he explained when he received hundreds of honorary workers in a demonstration on Monday (August 3, 2020) at the Governor's Office.

Meanwhile, hundreds of honorary personnel of the Papua province to the office of the Governor demanded the appointment of civil servants in the formation of 2019/2020.

Hundreds of honorary workers came by carrying banners, among which reads "We are 1200 honorary of Papua Province asked for the formation of the 2019/2020”

Representative of the honorary workers, Frits Awom said the request for the promises of the previous leaders to fight their fate to be appointed civil servants was immediately kept.

"We are honorary workers for Papua asking for immediate appointment in the formation of 2019/2020 based on the letter of the governor who once submitted to the head of Regional Staffing Agency of Papua," he said after delivering the aspirations of honorary workers also rushed to dissolve.